Do you know that the engine management system is the most vital part of your car? It consists of a wide range of electronics and the electrical components including, sensors, relays, Engine Control Unit, and actuators, which works in sync to provide the Engine management system its vital data parameters. All these components govern the various functions of the engine and, therefore, must be kept in the best condition. Royal Swiss Auto is no less here, our specialized team of technicians at Royal Swiss Auto make sure for engine’s proper functioning. 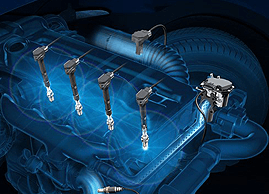 Engine control unit is the virtual brain of the engine, which plays an important role in collecting, analyzing, processing, and executing all the data, it receives from the car’s sub-system such as, vehicle speed sensor, engine oil pressure sensor, and many more. Therefore it is imperative to keep ECU also in good condition for the well-being of the EMS.

Various symptoms of a damaged ECU

If the ECU is performing well, you can get the other sub-system checked, such as PCM, transmission control module, general timer control, electronic suspension system, speed control unit, telematics control unit, fuel injection system, safety-related system, anti-lock braking system and also comfort system. You can get an elaborative diagnosis done of your car by the experts at Royal Swiss Auto.

Our Process Of Working

At Royal Swiss Auto, we have a dedicated team of experts who deliver their productive time to diagnosing the problems. They dive deep into your car’s programming system and identify the issues in the nodes. They further do elaborative testing, analyzing, and processing to get rid of the issues in the system. So if your car is showing tantrums or symptoms mentioned above, get it checked at Royal Swiss Auto to save time and money.

Trust us for Engine Management System Repair of your Mercedes, Porsche, Range Rover or other cherished luxury car.